High-speed Communication with Advanced Laser Instrument (HICALI), developed by JAXA and NICT, is an upcoming optical communications research program scheduled for launch on the upcoming ETS-9, a satellite that will operate in GEO above Japan. The program plans to reach the 10 Gbps-class (see: 10G-PON) in uplink/downlink space communications between the satellite and the OGS. The satellite will operate at 1.5μm and will later be expanded to multiple wavelengths using wavelength division multiplexing (WDM). BridgeSat and AstroTerrace are developing the front-end optical system for HICALI. Tesat-Spacecom is developing a technology to merge the communications system with the optical front-end. [1]

The HICALI project was deemed feasible in 2014. A breadboard model was completed in 2015 and the project passed evaluation in 2016. Almost every key device in the HICALI system is based on Commercial-Off-The-Shelf (COTS) parts. A snapshot of the project’s main specification is shown below. 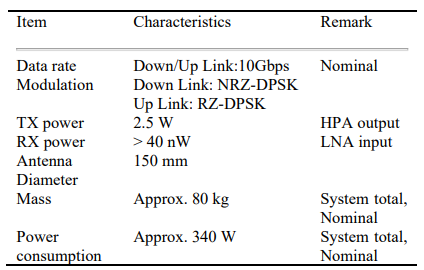 The satellite aims to be the first in-orbit verification of a 10G-PON class laser communication satellite system from GEO to ground. The project aims to verify modulation and demodulation schemes, test high-speed optical devices, and gather data on laser beam propagation. The HICALI unit will have a central data hub, an optical amplifier, a transceiver, and a head assembly unit for ground uplink/downlink. As of October 2019, the HICALI system is in its final stage of optical component selection and system design.

Paper: February 2018 design status update of the development for a GEO-to-ground optical feeder link for HICALI