Lack of Side Lobes

Side lobes are additional local maxima patterns found in antenna sources which are separate from the main maxima or signal. Side lobes radiate at off-angles from the main transmitter, as shown in the figure below. Since these side lobes carry the same signal as the primary lobe, they can be picked up by eavesdroppers. The listener doesn’t have to be in the beam path since the side lobes radiate at off-angles. For secure transmissions, this can present a serious problem for communication security.

Antenna pattern with side lobes and nulls illustrated: 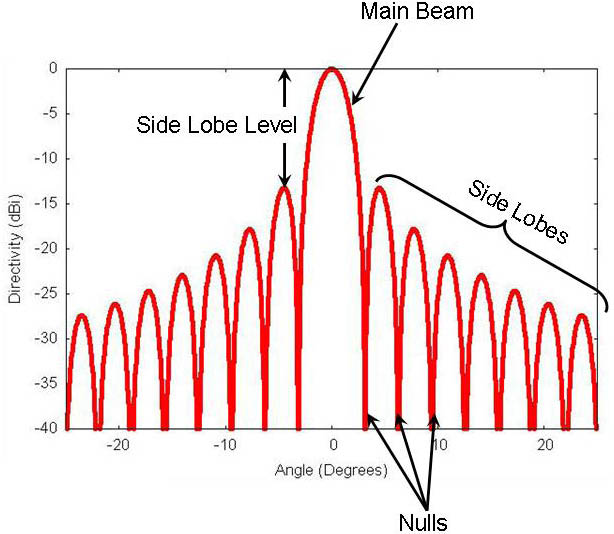 In free-space optics, the coherent laser radiation of light creates a much narrower signal beam than a signal from a radio antenna, eliminating side lobes. While there are technically “side lobes” in a laser, these are usually attenuated nearly 1000 dB or higher and only appear at nearby wavelengths, as opposed to angles from the antenna. That is, in order to see side lobes from a laser, a listener would need to look at a slightly different wavelength of light which would transmit at a very weak power and would only come directly from the laser source itself. As mentioned before, the attractiveness of side bands comes from being able to listen in on a signal without being in the path of the signal. This is not possible with free-space optics. FSO signals are much less likely to reach adjacent satellites and they are therefore much less likely to cause ASI. [1]